Yurok is a Hard Red Spring hexaploid wheat variety developed from the cross UC1110 / UC1037 Gpc-B1-Glu-D1d, 2NS_trans. The variety was developed by the University of California wheat breeding program and was tested in Regional Yield trials as experimental line UC1745 (http://smallgrains.ucdavis.edu/). 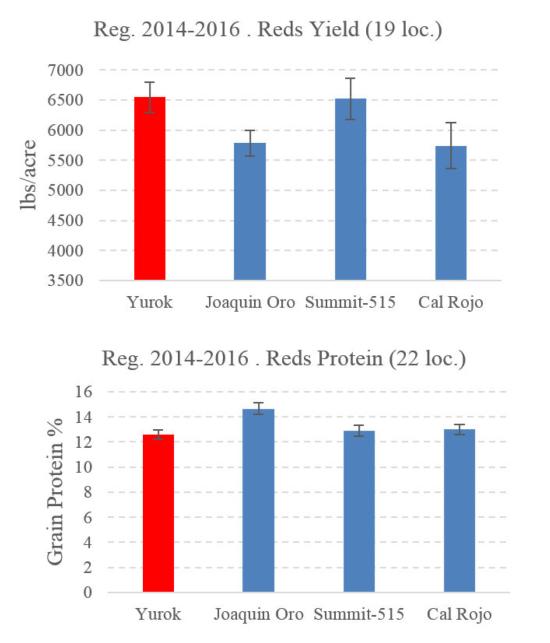 Yurok is resistant to all current races of stripe rust present in California and shows good tolerance for BYDV and septoria.

Yurok showed excellent bread making quality in evaluations performed by the quality Laboratory at the California Wheat Commission and by the milling industry at the California Wheat Collaborator Program (2013 and 2014).  Yurok carries the GPC-B1 gene for high grain protein content, and shows protein contents similar to Cal Rojo and Summit 515, but lower than Joaquin Oro.  The molecular marker for the GPC-B1 gene can be used to distinguish Yurok from most current commercial CA varieties.

AREA OF ADAPTATION AND PRIMARY USE

Yurok performs well agronomically in all areas where it has been evaluated in California and has good quality characteristics for bread making.  Yurok appears to be very well suited for the Sacramento, San Joaquin and Imperial Valleys where it shows high yield potential under irrigation.  In all these regions Yurok showed excellent bread making quality and resistance to the major pathogens found in California.  Its primary use is for bread production.

The Department of Plant Sciences at UC Davis will maintain Breeders seed.  Foundation seed will be produced and distributed by the Foundation Seed Program of the University of California, Davis.  The California Crop Improvement Association will provide certification services.  New Breeders seed will be produced as needed from head-row progenies obtained from the original Breeders Seed lot.  Increases of Foundation Seeds from Foundation seed are allowed for indefinite number of cycles.

Yurok is a public variety released by the University of California, Davis, a public institution.  It is protected under Plant Variety Protection under Title V, and is sold as Certified Seed.  Commercial seed is available from Adams Grains and Penny Newman.

To obtain information and/or a license for Yurok contact the University of California, Technology Transfer Services, UC Davis Innovation Access: