Wax is abundant on the surfaces of leaves, glumes, stems and peduncles in mature Patwin plants (Figure 1).

Patwin performs well agronomically in all areas where it has been evaluated in California and has good quality characteristics for bread making. Patwin appears to be well suited for the San Joaquin, Sacramento, and Imperial Valley where it shows high yield potential under irrigation. Patwin combines a high yield potential with excellent bread making quality and resistance to the major pathogens found in California. Its primary use is for bread production.

Patwin is resistant to current field races of stripe rust present in California. Patwin also has the lowest levels of flag leaf infection with septoria tritici blotch among the hard white wheats (see comparison with Blanca Grande and Clear White in Figure 3). Patwin has been identified to have resistance to root-knot nematodes in potted studies but the economic benefit to subsequent susceptible crops in the rotation is unclear.

Patwin showed the highest yields in the San Joaquin Valley (9 locations) and the 4th highest yield in the Sacramento Valley (8 locations, Figure 2) Small Grains Regional Trials (averages 2008-2010). It was also the 3rd highest yielding released variety in the Imperial Valley. Because of its high yield potential in all three valleys, Patwin is recommended for all three regions. 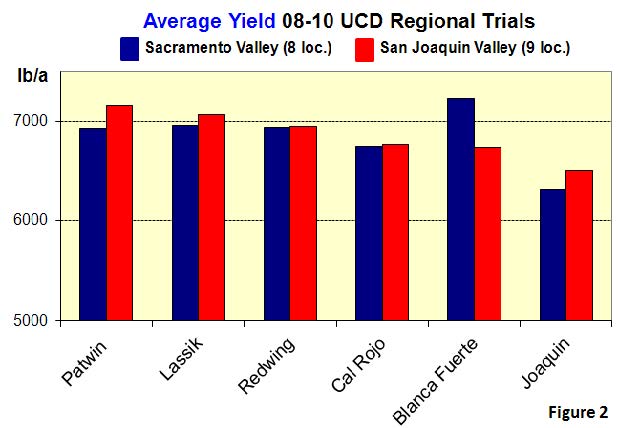 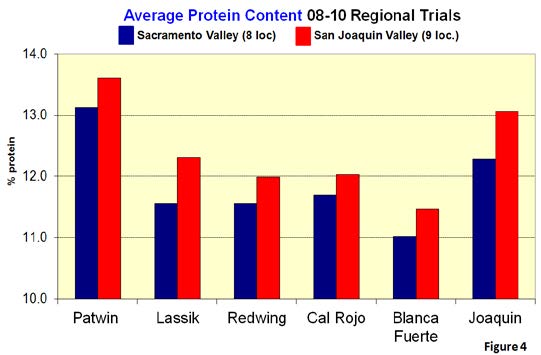 Foundation seed of Patwin is distributed by the University of California Foundation Seed Program to licensed brokers and seed houses twice annually, fall and spring. Off-cycle requests are considered on a case-by-case basis.

To obtain information and/or a license for Patwin, contact the University of California, Davis Technology Transfer Center: